What Every Motorist Needs to Know About Teen Drivers 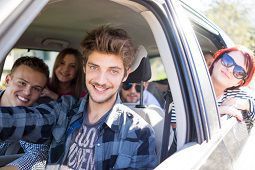 Did you know that teen crash fatalities increase during the summer months? In 2013, approximately 220 teenage drivers and passengers suffered fatal injuries every month of summer. Teen drivers and passenger deaths not only spike during the summertime, but they are up 43 percent compared to the rest of the year, according to an AAA analysis of the government’s Fatality Analysis Reporting System (FARS).

Since we’re still in the “100 deadliest days”—the period between Memorial Day and Labor Day, during which teen crash fatalities typically increase—teen drivers need to be reminded about the importance of safe driving during the summer as well as all year long. All too often, teen drivers lose sight of the fact their actions behind the wheel impact others.

A new AAA Foundation for Traffic Safety report confirms this by revealing that teen drivers regularly have put others at risk. In fact, two-thirds of people killed in crashes involving teenage drivers were others outside a teen’s car. More findings from the study include:

Because teen drivers affect innocent motorists, everyone—including parents and even other teenage passengers—needs to do his or her part to help teenage drivers make the roads safer. Some of the ways to help reduce a teen’s crash risk and increase safety on the road include:

In order to do your part and help keep the roads safe, please share this article with those you know via Facebook. You never know: one click of a mouse may help save a life.

What Our Clients Say...